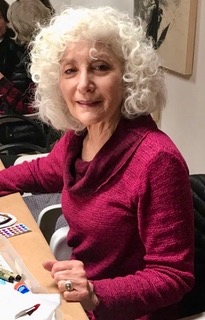 I began having symptoms when I was in my last year of High School, but over the summer felt a lot better. However, when I began college, I was feeling worse than ever. Numerous trips to the bathroom during classes was playing havoc with my studies. I had a trip planned during intersession with friends to go to Miami with the money from a state scholarship, but cancelled out when I got diagnosed with ulcerative colitis, and was put on prednisone and all sorts of other meds, but at the last moment, I began to feel better and was able to go. That turned out to be life changing, because that is where I met my future husband, who was a senior at my college (Brooklyn) and we began dating seriously when we returned to school. Unfortunately, I now was getting progressively worse and was hospitalized for a month and had to drop out of school. At that point, he was coming to visit me every day and we got closer and closer, so by the end of the school year, we decided to elope, because we knew my parents wouldn’t have been happy for me to get married at 17! In any case when my daughter was born, they changed their mind. Three years later, we moved to LA and they were heartbroken. I had my son a year later, and that is when my UC began getting really bad again and I was on tons of meds and nothing seemed to help. I had a fistula that made me incontinent and the surgical repair failed. At that point I became desperate and finally asked for the surgery, since I had been in and out of hospitals and with 2 young children, it became impossible to lead any sort of normal life. So, it turns out that I actually had Crohn’s disease and had a total colectomy and had an ileostomy created, but would need another surgery in a couple of months to remove my rectum. Luckily, I was visited by a wonderful volunteer who helped me through the first months and years of my ileostomy. She showed me how she used a 3M product 1524 as an adhesive on a cryovac bag and a wafer- now called a barrier and this ‘do it myself’ setup has worked for me for over 48 years! The only thing I’ve had to change recently is the barrier because of stomal retraction which began a few years ago. 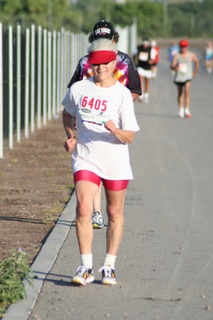 When I recovered from that surgery, I began a new life where I could make plans and be confident of being able to keep them. I began to play tennis when we moved to Florida a few years later. When we got back to LA, I got interested in aerobic exercise and after several months began teaching which I did for about 8 years. I also began to take up fast walking and got into a group with my husband and several others-we called ourselves the Walkie Talkies and we met several mornings a week and hiked all over LA- anywhere from 4 to 8 or more miles and talked the whole time. Then we entered half marathons and in 1991, I walked the LA marathon in about 5 hours. My husband and I always vacationed by doing walking and hiking tours all over Switzerland, Italy, France and Austria. When we moved to Santa Fe in 1992, we took up race walking and entered local and then city and state races. I won the fastest female race walker in New Mexico in 2007 in the over 55 group when I was 63. I don’t compete anymore, but still walk between 3 and 4 miles almost every day that it is not snowing. Also, when we moved to Santa Fe, I got interested in working with my dreams and BookArts and have been making a book out of my dreams every week for the past 25 years. My handmade books are in University collections all over the US and one of my books is in the Smithsonian library of African American Arts. And that is not to mention my 5 amazing grandchildren ages 19 to 28! So, all in all, I have led a very active and full life that I could never have imagined all those years ago!