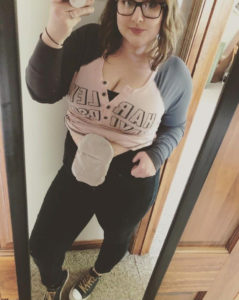 I was diagnosed 7 years ago with ulcerative colitis. My boyfriend at the time (now husband) was there through everything – he loved me, helped me, cleaned me up when I had accidents and just did everything he could for me, even though we were only together for a year at that time. After 3 years of suffering, no medications working and a wedding later, three months after getting married I had my colon removed and had an ileostomy placed.

Shortly after that we decided we wanted to try for a baby. Went through all the hoops and I got pregnant pretty quickly. Pregnancy went ok until about 6 months, then started having problems. At 28 weeks, my son was born during an emergency surgery. I had two hernias and a serious intestinal infection that almost killed us both. My son was resuscitated for 10 minutes and developed a brain bleed and needed 2 brain surgeries. He was diagnosed at two with cerebral palsy and is the strongest guy I know! I was so close to death, had my stoma placed right near my ribs and had a really hard time after that.

Last year I had my rectum removed and had mesh placed because of another hernia. Three surgeries and a whole lot of complications later, I am here, with an amazing family, the best husband and son I could ever ask for and a beautiful home that we bought two years ago. Life is soo soo short. I have learned to be positive always, constantly find the good and push through the bad.

Na’Scent was a lifesaver through all of this, thank you!” – Erin Laura.