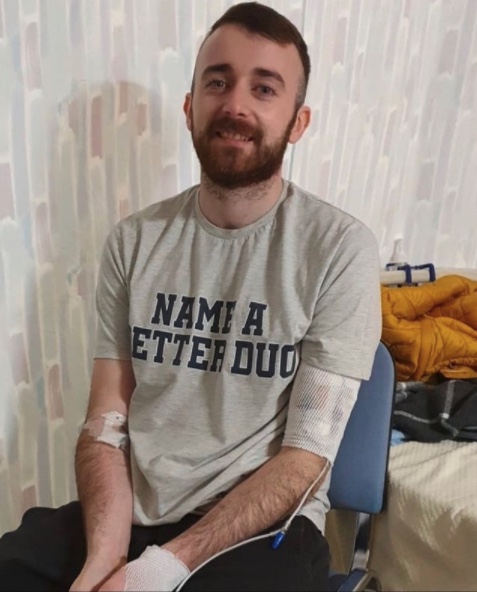 This is my Crohn’s story, which hopefully will not be too long. I first got diagnosed in November of 2018, but my symptoms started in 2013, it really started with loose stools after some meals which lead to needing to use the toilet 5 to 6 times, feeling bloated and having cramps in a short space of time. After the symptoms become noticeably worse, I went to the doctor, this visit resulted me in having to keep a food diary, by doing this I noticed that some foods may be a trigger which ultimately led me to cutting them out of my diet but as I was young it was difficult to always stay on track. I began noticing a weight fluctuation month to month and I was still suffering with cramps, with these symptoms ongoing doctors’ trips became more, yet was still told there was nothing wrong which obviously was frustrating. It was when the loose stools became a daily occurrence with the addition of blood and mucus that it was time to get a second opinion and again a food diary was suggested but at the time it was all so confusing considering all foods seemed to be a trigger even while maintaining a healthier diet. At this stage it was 2014, a year of frustration and confusion, being controlled by my own body and the symptoms that apparently doctors could not figure out the reason behind it. It was all so much to take on at a young age, not knowing what was wrong or the unpredictability was unbearable, I stopped going to soccer games and some outdoor social events just because I didn’t know if there was a toilet nearby. It was all just so overwhelming it made it hard to talk about as at the time it seemed embarrassing to me which was mentally challenging.

It was 2015 before I finally got a colonoscopy, which was finally a way to get some real answers, it was a nerve-wracking time. The results were sent to the local doctor and was told everything was fine again when all they did was remove a polyp which they thought was the source of the problem but even after the healing process the symptoms were still the same. I thought I was going to have to give up on getting an answer on what was what wrong with me, that this was the new normal for me, it was devastating how much my mental health suffered as I just put on a brave face even though it was killing me.  I came to find out that in November 2018 when I was diagnosed with Crohns that there were signs of Crohns from that exact colonoscopy but was never followed up by the doctor and to this day I still find bizarre. The weight fluctuation continued, I was constantly as pale as a ghost and at this time I was relying on Imodium so much to an extent I thought I may have nearly been addicted as it helped me out so much. I was taking it daily and for long periods of time, I was severely reliant on them before a special occasion or even a night out just so I had peace of mind and I could enjoy myself. When November 2018 came around, I was at my worst, I hid the problem from everyone when they asked was I ok even though at this stage it was physically obvious that I was in pain and was sick. The symptoms obviously worsened, I had cramps, blood and mucus in my stool, severe night sweats and vivid nightmares it was just overpowering every aspect of my life. One day in November I had taken 2 Imodium as I had an occasion to go to and then when I went to work a couple of days later it was clear that my body was struggling, every aspect of the day was excruciating, it felt like I had swallowed razor blades and was seconds away from collapsing as the blood drained from my face. After them ultimate warning signs I went home from work, that day it was like a stabbing pain across my stomach that made me drop to the floor in tears, the only way I can describe it is it was like a football was trying to pass through my entire system. The next morning when I went to go downstairs, I could not stand up straight and that’s when my Mam knew that I needed to go straight to A&E, when we arrived at the hospital, I was waiting for hours to be seen and to this day I believe I was the sickest person in that waiting room. Eventually I was seen by a doctor and then was told id be here for at least a week, the upcoming days consisted of taking bloods, CT scans, MRI’s, and stool samples and yet I knew nothing more than when I arrived. Towards the end of the week, I was told my calprotectin levels were extremely high and I was getting a picc line put in. As terrified as I was having to have it in, I felt such a change in myself that I needed for such a long time, I had the picc line in for 20hrs a day, and towards the end of the week I was told it could be Crohns or colitis. I was eventually told I had Crohn’s disease and I done the thing everyone tells you not to do, I researched as much as I could about Crohns and it terrified me looking up so much information about it, I was told Crohns is an incurable disease, that to be honest came as a big shock to my system as I was young, and it was a hard pill to swallow. 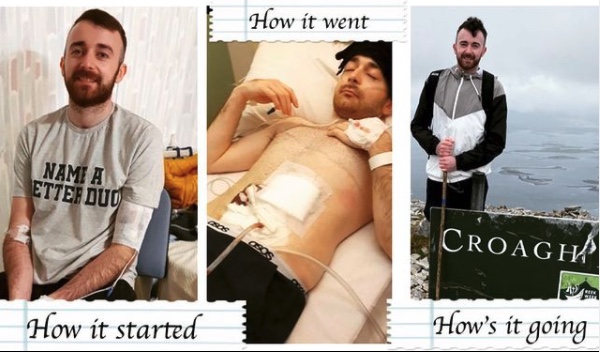 The next couple of weeks I stayed on the fresubin 2kcal drinks and took my imuran and I did feel better than I previously had the last couple of years it was like a weight had been lifted. I did find after being on a diet set by a dietician for a couple of weeks after the period of drinking fresubin, it got easier to feel better eating and there was plenty of food I could eat, but I was also happy to get back eating, after not been physically eating for 3 weeks after a week or so on the low flex diet I finally noticed my stools were coming back to normal. At the beginning of January 2020 I had extremely bad lower back pain and it got to the stage where I could barely move, when I went to A&E they told me I had pulled a muscle and gave me some non steroid anti inflammatory drugs which temporarily helped until a few days later I was in extreme pain which I had felt before, and I went straight to A&E and the doctor explained that I was having a huge flare up and shouldn’t of been taking the non steroid drugs because they don’t pair well with Crohns. I wasn’t long out of the hospital before I was brought back in but this time by ambulance, the pain never eased, and it felt like being stabbed in the gut. The doctor brought me down for a CT scan after that, a little while later the doctor came back in and told me that there was a hole in my intestine and I would need emergency surgery to remove a foot of my intestines, of course that was devastating news to get, I honestly don’t think I’ve ever cried as much in my life.

The day of the surgery was emotional, I had never felt as nervous as I did that day, the fear of the unknown is what was difficult to handle but the surgery was scheduled on March 10th 2020 which is the date of my granny’s birthday and I found comfort in believing that it was a sign that everything was going to go well. Surgery was a success, I had a right side hemicolectomy and it went according to plan, I woke up and immediately and asked did I have a stoma and the nurse said no and I slept for the day, I was just relived and happy that it was a success. After the surgery I had the task of having to get out of bed and to move to help the healing process, it wasn’t easy but I had a persistent nurse who wasn’t going to stop until I was up moving and by day 3 I was able to get up and move by myself, not only that but I finally was able to eat, I started with a bowl of rice krispies and it was the nicest thing I ever ate. I found the road to recovery extremely hard, for the first six weeks as it was very hard to move around without been in pain or uncomfortable and for them six weeks, I was constantly going toilet probably 4-6 times a day and it was always diarrhea but that was because my intestines were adjusting to been a foot shorter I am now a year after surgery and a year med free also and I honestly couldn’t be happier with how things are going. I’m obviously still finding the ins and outs of what foods I can eat and my own limits which can be difficult at times, it’s a struggle when you’re doing well for a period of time and then you eat something that doesn’t agree with your system and the evening is spent near the toilet, it is definitely mentally challenging, but I always have to remind myself that it’s only a blip and tomorrow will be better. My journey with Crohns has not been easy but I forget to give myself credit for what I have gotten through and what I have accomplished and have yet to accomplish. It has been a challenge for me physically and mentally, but I have started the stages of acceptance and I know I’m in a good place in accepting Crohns and how it’s a part of me and I’m proud of how far I’ve come.